The w pattern or double bottom pattern is one of the technical analyzes based on the graph pattern that shows trend changes or momentum reversal with price action priority. This pattern represents a decline in assets in digital currency or other financial markets, a rebound, and then a kind of decline exactly like the decline that occurred at the beginning of the pattern. This graph is similar to the letter W, which takes two drops at a certain distance.

The double bottom technical analysis chart, or W, shows an initial drop with a 10 to 20% price reduction. The second drop in this chart will be 3 to 4 percent less than the initial drop, after which the trading volume will increase.

Like other chart patterns, a W or double bottom pattern is the best option for analyzing digital currency markets based on medium and long-term maps. The greater the distance between the two drops in the chart, the greater the probability of success and completion. It takes at least three months for a complete double bottom chart to form ultimately. If such a time frame is available, the probability of success of the W model can be considered close to 90%. So when you want to do chart analysis on this template, use weekly or daily price data. Recognizing the pattern at shorter intervals can drastically reduce its success rate.

The W pattern always occurs after a negative trend in a certain period, and after the formation of this pattern, we will most likely see a positive routine. This pattern must be approved based on market fundamentals. It shows the characteristics of a kind of reversal in the market trend. However, the volume of transactions should also be checked frequently. A sudden upward change in market volume can occur after both positive price trends in the chart. These changes are significant indicators in determining the positive trend pressure and confirming the formation of the W pattern.

When the price closes in the second rebound and reaches the highest level of the first rebound in the pattern and the upward changes in trading volume are confirmed by the stabilization of the market mode index fundamentals, you should immediately open a long position. This position should equal the price level of the first rebound, and a stop loss should be created in the second low chart. The profit target should also be twice higher than the initial price before the stop loss.

The Difference Between a Double Bottom and a Double Top

The W graph pattern, like other patterns, can be very effective if detected accurately. However, if you misidentify the pattern, you will see a lot of damage. Therefore, when recognizing the pattern, you should keep in mind all the tips and specifications so that you do not fall into a trading trap.

How to identify a W pattern 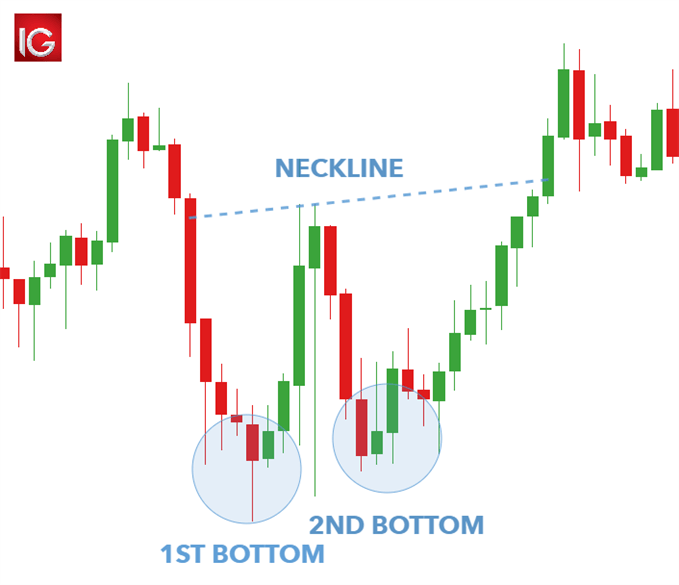 In general, there is a way to identify the W pattern, which can be expressed as follows:

Trading with a double bottom pattern in the crypto market

The W chart or double bottom pattern is used in most financial markets, including cryptocurrencies, and is useful for opening medium to long-term positions. Entering any trade involves waiting for confirmation of the candle close to the bottleneck. This method slightly increases the risk but also increases the probability of success in the transaction.

Most technical analysis technicians believe that the first bottom should include a 10 to 20 percent price reduction. The second bottom should be 3 to 4 percent less than the first. The next leading trading volume should also increase.

Just like other technical analysis models, the W model is used to analyze medium to long-term situations. As we said, the distance between the two drops in the chart should be significant to increase the probability of success.
Method of trading with W pattern

The double bottom or W pattern indicates a seller’s exhaustion. When salespeople get tired, a reversal trend sets in. This strategy can also make it easier for you to target profitability accurately.

However, it is difficult to use this method by trading in tops and bottoms patterns. In pattern W, you have to wait for the final pattern to form in the long run. There are three main points for traders:

We must first identify the market phase for the pattern. We do this because the W pattern needs a downtrend. By reverse detection, the time to enter different stages of the transaction can be found. So the first option is to detect the phase or state of the market. At any given time, the market can move up, down, or even sideways.

You do not have to decide or set a target for the transaction without confirming the price line. To be able to work with the pattern more so, you need to see both rounded bottoms. In technical analysis, a round bottom is a price that is formed after the downtrend. Prices go down and then move in the opposite direction with a circular screw.

Allow only a tiny variation between both bottoms.

Never look for a perfect chart. You have to give up your idealism on an excellent deal because you may never get the best W pattern you have in mind. So be flexible. In this case, look for a slight change between the two bottoms.

Purchase when it closes above the neckline

Once the market and pattern phase is complete, you should wait for confirmation and see the momentum change. The indicator here is the breakout candle, so buy when the price is slightly above the bottleneck.

Place a stop-loss line just below the support formed by the reversal pattern W. You should also be able to identify subsequent risks with a W pattern. If you have a stop-loss, you will no longer have to worry about severe losses and the loss of all your assets.

In digital currency markets, due to the many fluctuations, it is complicated to distinguish a W or double bottom pattern in short periods. So we suggest that you place this pattern for more significant impact in periods of 1 to 6 months so that you can make the most profit.

What is your reaction?

What is RSI divergence and how to use it?

Which cryptocurrency will be profitable to mine in 2022